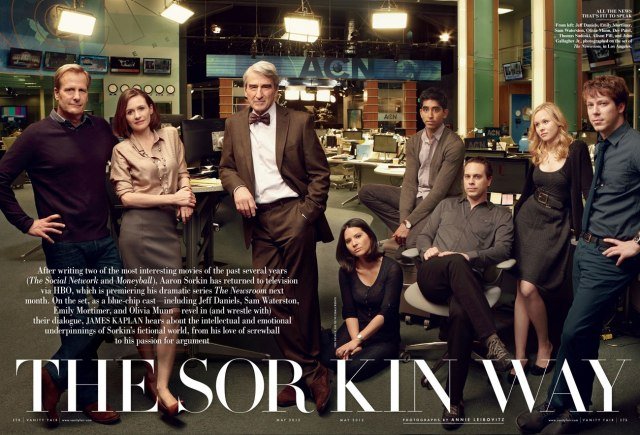 When I first met my husband, I was amazed that he had never ever watched The West Wing. And I envied him tremendously for having yet to discover this brilliant series. Not that I didn’t enjoy watching it again ; but there is something unique to the first time you watch an Aaron Sorkin show.

I was hooked as of Sports Night, long before his was a household name, long before The West Wing was so acclaimed both critically and commercially (why do we keep opposing the 2, beats me). Sure, like everybody, I had watched A Few Good Men and the « You can’t handle the truth » speech, but Sports Night was the one that did it for me. To this day, I’m probably the only Parisian owning the entire series on DVD. Or Frenchwoman. Or person, for all I know, it wasn’t a great success at the time.

So The West Wing, and husband-to-be (unbeknownst to both of us at the time) yet to watch a single episode. We watched together the entire series. 7 seasons of 22 episodes of 42 minutes, all in english with french subtitles, when Now-Hubby hates subtitles. But that was my one condition : no french dubbing. The rhythm of the phrases, even if not understood, have such a ring to it. And the original voices… Could C.J. Cregg sound any different ? I don’t think so. And I don’t want to know what she sounds like in French.

Before I trailed him along for this marathon (it took us over a year to do it all, 3 episodes at a time), Husband-to-be had asked me what was so special about this show, and this guy, Aaron Sorkin, I kept talking about (not jealous, just curious). At the time, I said it was a show (and a guy) who didn’t assume his audience was either stupid or snob. He wouldn’t stoop so low as to explain everything or take systematically the easy road ; but he wouldn’t either leave you feeling dumb and ignorant. And he knows characters. I know he has said often that he doesn’t think « C.J. wouldn’t do that« . Because he doesn’t have to. He doesn’t have to fight for the truth in character development, the guy has such an instinct for it he doesn’t even know he’s doing it. He’s the Monsieur Jourdain of character development.

And since the end of The West Wing, I’ve been watching a lot of TV series without feeling the same fulfillment of having been both entertained and not dumbified (is that a word in English ? You get my drift). Some have entertained me, sure. But there was something missing.

So when Twitter started to buzz about the Newsroom, I was so excited. I was waiting for Sunday July 1st for the season to begin. And of all the male leads, to choose Jeff Daniels ! And Alan Poul will direct ! And Sam Waterston, that’s a stroke of genius right there. Of course it’s HBO, who else could it be… And HBO had the excellent idea to make available the pilot online. Thank you HBO. I didn’t have to wait till July 1st for the pilot. Now it’s another story how I will wait for episode 2..

I loved everything about the Newsroom. The cast (see above), the set, the fact that he’ll be using actual real events from the past to show how it could have been done, the excellent monologues – NorthWestern of course but also the Quixotic one, Emily Mortimer and her cute accent and the fact (like C.J. Cregg) that she’s not 25, not blonde, and definitely not dumb, and embracing all those things.

I kept talking about it to Huby (as it is Hubby now). He still doesn’t get it. It’s just a TV Series, after all.

Yes honey, and that’s the beauty of it.